On Top of the Trend

On Top of the Trend

This event is called a major agrarian one for a good reason, though its relation to agrarian processes is indirect. Once in two years, agricultural experts gather to discuss the prospects for the industry development and demonstrate their achievements. This is Agritechnica exhibition. On 12–18 November, it was held in Hannover (Germany). Now it’s time to share impressions and sum up the results.

Here are some figures for an understanding of the exhibition scale. 2,803 companies from 53 countries delivered their products for over 450,000 visitors. In 23 pavilions occupying 387,371 square metres, nothing less than the trends of the agriculture development for the years immediately ahead were determined during the exhibition days. 28 Russian companies were among those participating in this process.

The stand of Rostselmash became a point of attraction for delegations, private visitors and journalists. The Company became the leader in terms of innovations per square metre, and this was evident: there was always a crowd of visitors near its agricultural machines both in the first (more official) days for delegations and during the exhibition time for farmers. The huge letters ROSTSELMASH could be seen from outside through the pavilion window glass, and for many visitors the tour of the exhibition started exactly from there. First, a service car came into view of the visitors, and then the attention of farmers, “bauers”, agricultural holdings and officials was captured by TORUM 770, NOVA and RSM 161 grain harvesters, as well as RSM F 1300 and RSM F 2650 forage harvesters.

Next to the machinery some special exhibits were displayed: a harvester simulator cab, a model of a rotor thresher-separator unit with a unique system ARS, an innovative cleaning system 5D.

The exhibit display was composed with account of the exhibition subject area and the professional tasks set for the agricultural industry today. Agritechnica 2017 was held within the framework of environmental protection initiative; “smart” agriculture became the central subject of all the events (both the business and educational programmes, as well as numerous seminars and round-table discussions). “Green future is in smart technologies” — this motto of the exhibition defined the interest in cost-effective use of resources, productivity gain, intellectualisation of agricultural technologies, provision of agricultural management support.

This is confirmed by the business and educational programmes: smart farming, neuro-adaptive technologies, machinery control interfaces and even Landwirdshaft 4.0 — new-generation agriculture. The products of Rostselmash complied with the agenda of today’s agriculture quite successfully. More resource saving, less environmental impact — those were the principles declared during the presentation of the innovative products — NOVA grain harvester (most expected on the continent in 2017), as well as RSM F 1300 and RSM F 2650 (the new models of the forage harvester line). By the way, those products attracted special interest.

RSM F 1300 for small and medium-sized animal farms and RSM F 2650 for large-scale farms and contractors represent various power classes but are designed in a single environmental and intellectual style: their tasks are environmental impact reduction, operator labour facilitation and human factor minimisation.

F 1300 was the harvester that attracted the interest of the European visitors quite unexpectedly — it is viewed by the farmers as a machine that can replace obsolete and served out ones.

As to RSM F 2650, it was its remote monitoring option that caught the interest of the visitors: the data from all the machines can be integrated by Agrotronic system allowing for control of the machine operation and optimal estimation of field works.

The second point of attraction for the visitors was NOVA — a compact harvester of Class 3 with the potential of Class 4. It should be mentioned that small agricultural machines have become another popular trend today. Such machines were also delivered to the exhibition by Deutz Fahr and New Holland, but it was NOVA that became a real star. Combination of simplicity (which means reliability), technological effectiveness and great adaptability to the operational conditions of not a very large farm seem to secure the excellent future of the new machine.

Rostselmash really got on top of the trend offering NOVA — a solution for “bauers” (not very large farmers). Agritechnica showed that the harvester found its target consumers.

TORUM 770 and RSM 161 grain harvesters demonstrated focus on another consumer group, as well. It comprises large farms and agricultural holdings. Until recently, there were no particular alternatives in the European market — only Claas and John Deere (by the way, the “fellow” support at the exhibition was really perceived — from the stand to the programme); in the market quite monopolistic prices were set. With the market representation of Rostselmash in Europe, many companies will have to worry.

This could be observed at the stand already. The grain harvester line issue that became most popular was not related to the technical part but to the location of the nearest dealer. Many visitors, mostly farmers that are either already using Rostselmash machinery or are only going to use it said literally the following: “Way to go!”

The second trend also pleased us. Currently, harvesting is becoming more and more complicated: the conditions are changing, the climate is becoming more humid, and huge crop volumes often need to be harvested within a minimum period of time. The fact that the operational conditions of Europe are becoming increasingly closer to those of Russia are obviously beneficial for Rostselmash: the machines designed for non-standard conditions will become the solution so long sought for. 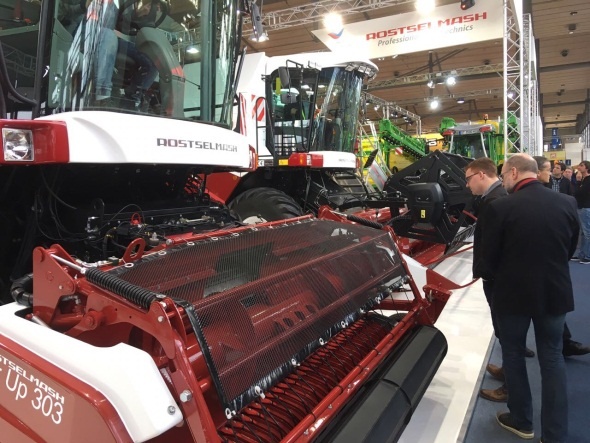 The optimistic plans for expansion of Rostselmash machinery in Europe will soon start to be executed: this is evidenced by the fact that the Company reached agreements with Australia, Japan, Turkey, Uganda, Algeria and India following the results of the exhibition. The Company policy of today is to open minimum two new markets a year. It seems that after Agritechnica this number will grow.